Who needs Super Nintendo World when an English town looks like this? 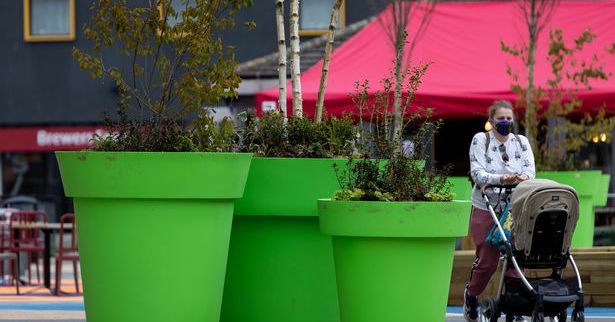 In March this year, Nintendo opened its Super Nintendo World theme park in Osaka, Japan. Now, just a few short months later, the Birmingham Mail reports that over a dozen giant green plant pots have been installed in Walsall, UK’s town center, prompting immediate comparisons to the Super Mario franchise. I’m not saying the two events are related, but the dots connect themselves.

“It makes the place [look] more like something from Super Mario Brothers,” florist Andrea Loveridge told the Mail. “They look like those warp pipes Mario jumps down.” This is apparently a bad thing.

According to local councillor Adrian Andrew, the pots are part of improvement works designed to “promote a feeling of wellbeing and safety and enhance the town centre environment.” He added that “a key element of this work was to introduce more planting into the town centre to create a more social space outside the Walsall Art Gallery.” Naturally, the warp pipes will also serve the immediate transportation needs of local Italian plumbers.

“The colour is vile, they are a garish eyesore and a complete waste of taxpayer’s money,” resident Joanna Parrish told the Birmingham Mail, while supermarket worker Sue Morrisson added that “they would look ok in a vibrant, modern town but in a dilapidated and tired looking town like Walsall, they just stand out like a sore thumb.” Critics also raised concerns about the cost of the pots, at a time when the council is having to slash millions from its budget.

Personally, I appreciate that a town is willing to take a punt on a weird bit of street furniture when so many are made up of the same identical collection of chain stores. Then again, I’m not the one who has to look at them every time I leave the house to buy a sandwich.