This is Microsoft’s vision for the future of meetings 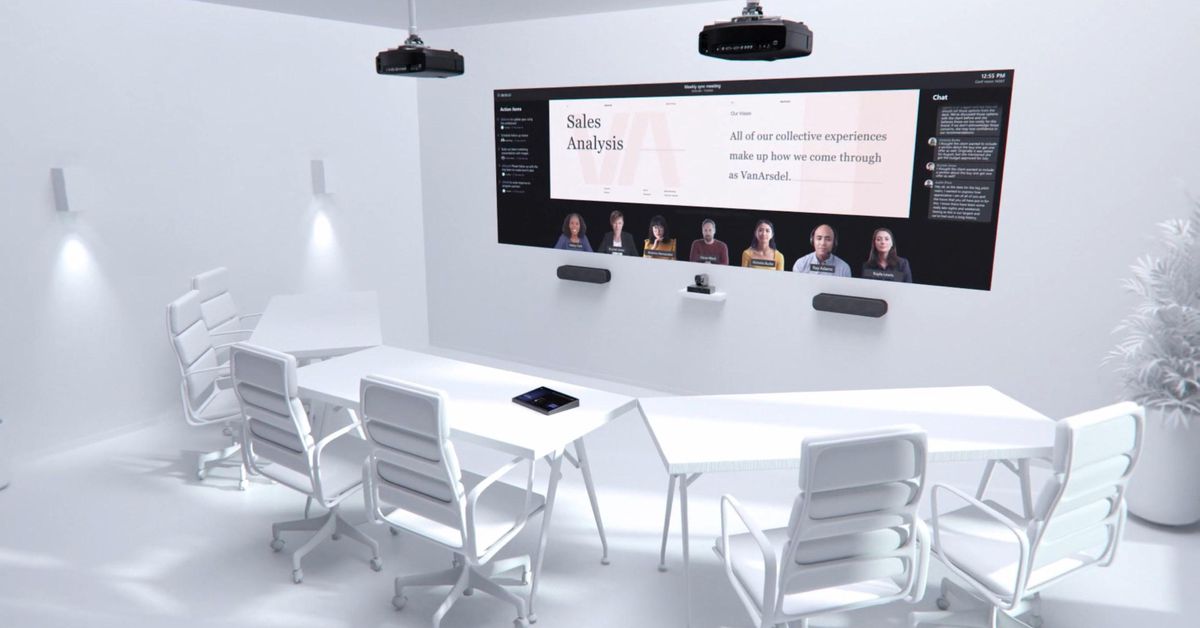 Microsoft is outlining its vision for the future of meetings today. After a year that’s seen more people dialing into the office remotely, the company is once again banging the drum for hybrid work: a model that combines remote access with in-person work.

While the company has been teasing new concepts for Microsoft Teams in recent months, it’s now starting to bring to life an updated interface for the communications software that will help blend remote colleagues into physical meeting rooms.

A new video details Microsoft’s plans, which include larger screens that help facilitate face-to-face meetings with life-sized remote colleagues. Microsoft imagines meeting rooms where cameras are placed at eye level to improve eye contact, and spatial audio that will help you hear colleagues’ voices when they’re dialed in. This spatial audio will also supposedly make it feel like a remote colleague is more present in a room.

This meeting room of the future looks like it’ll require a lot of hardware, though. Customers will need new intelligent video cameras that can detect who’s talking and bring them into view, speakers capable of spatial audio, and even microphones embedded into the ceilings. Microsoft itself might deliver some of this hardware: the company started selling Intelligent Speakers for Teams recently, which will help bring this future meeting room scenario to life.

This meeting room of the future is all part of a broader push by Microsoft to get ready for what it sees as a hybrid approach to work, where more employees will be working remotely or dipping in and out of the office.

“Hybrid work represents the biggest shift to how we work in our generation,” says Microsoft CEO Satya Nadella, in a LinkedIn post outlining the company’s approach. “And it will require a new operating model, spanning people, places, and processes.” Microsoft is releasing a playbook for businesses looking to adopt a hybrid model, with data and research it has conducted during the pandemic.

Microsoft has been gradually opening up its campus in Redmond, Washington in recent months, and remote meetings have become a big focus point. “In fact, at Microsoft, meeting recordings are the fastest-growing content type,” reveals Nadella. “Employees now expect all meeting information — whether that’s recordings, transcripts, or highlights — to be available on demand, and on double speed, at a time that works for them.”

Microsoft’s meeting rooms of the future will require more hardware.

The push toward hybrid work also opens up security challenges for organizations. Microsoft is embracing this new era by removing its own employees from corporate networks and taking an internet-first approach instead. That means ditching the old era of corporate domains and intranets you need VPNs for and having all data in the cloud. Of course, Microsoft also happens to own Azure, so that makes it both easier for the company to switch and an incentive to promote its cloud business. For other businesses, it’s not always an easy task to embrace the cloud fully.

Microsoft is also asking its own employees who work from home to “run a test of their home networks to ensure they are secure,” and requiring that every mobile device that accesses corporate information is managed. We’ve seen a variety of ransomware attacks and increases in phishing attempts during the pandemic, and Microsoft says the threats keep on increasing.

“The threat landscape has never been more complex or challenging, and security has never been more critical,” explains Nadella. “We intercepted and thwarted a record 30 billion email threats last year and are currently tracking 40-plus active nation-state actors and over 140 threat groups.”