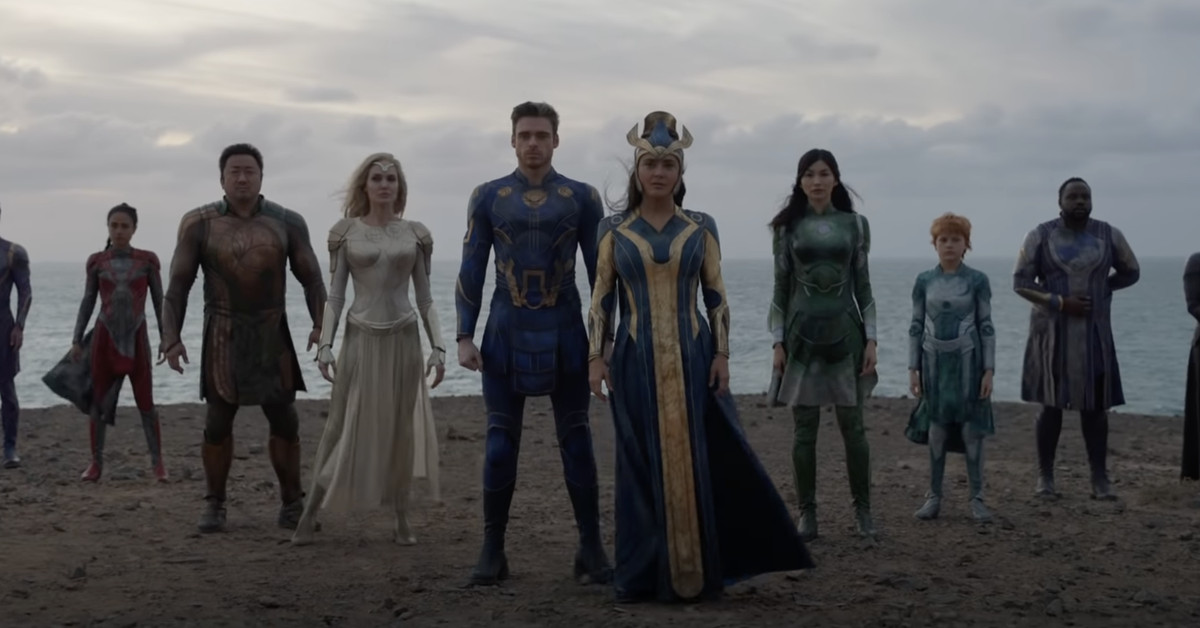 After a brief teaser earlier in May, Marvel has finally revealed a full-length trailer for Eternals, set to hit theaters on November 5th. In addition to being the latest entry in the MCU, Eternals is the first film from Oscar-winning director Chloé Zhao since winning Best Picture and Best Director wins for Nomadland earlier this year.

The trailer doesn’t actually do much to showcase the plot of what Eternals will be about, instead focusing on the civilization-spanning scope of the superhero team and its members throughout human history.

“We have watched and guided. We have helped them progress and seen them accomplish wonders,” Salma Hayek’s Ajak muses, as we see the Eternals help humanity raise crops, establish cities, and war throughout the ages. “Throughout the years, we have never interfered — until now.” As to what threat is causing the Eternals to join together and intervene in the course of human events? That will have to wait until future trailers (or the actual film itself).

Eternals is notable for several reasons beyond its plot. The cast — led by Gemma Chan (Sersi), with Angelina Jolie, Kumail Nanjiani, Brian Tyree Henry, Lauren Ridloff, Salma Hayek, Lia McHugh, and Don Lee, as well as Game of Thrones expats Richard Madden and Kit Harington — is easily the most diverse lineup of actors in any of the Marvel Cinematic Universe films to date. (Albeit, it’s a milestone that took over a decade and nearly two-dozen films to reach.)

It’s also a big swing on Marvel’s part in terms of getting audiences on board with a new ensemble cast based on a less popular property. The Eternals — a group of immortal heroes who have existed alongside human civilization for centuries, often mistaken for the gods of human mythology — aren’t exactly household names, even with a much-hyped new run of comics from superstar writer Kieron Gillen currently in print.

It’s a similar kind of gamble that the company has taken in the past on other lesser-known teams, like Guardians of the Galaxy — now one of Marvel’s most beloved group of characters. But these experiments have also gone south fast: just ask Marvel’s Inhumans, which was passed off from feature-length film down to the now-defunct Marvel Television studios to turn into a series instead, which was widely panned and then canceled after a single season.

With a cast full of Hollywood A-listers and one of the most exciting directors around working on the project, it seems unlikely that Eternals will meet Inhumans’ fate — but we’ll have to wait until November to find out for sure.