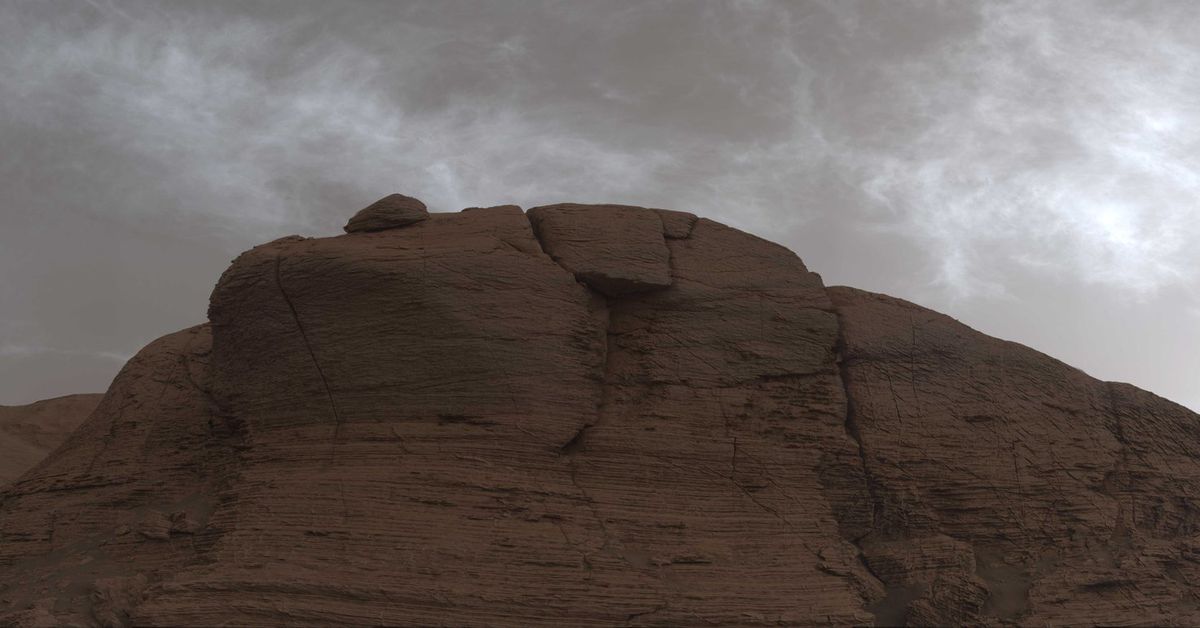 NASA’s Curiosity rover has captured images of clouds on Mars— as described in its blog post: “wispy puffs filled with ice crystals that scattered light from the setting sun, some of them shimmering with color.”

According to NASA clouds are rare in the thin atmosphere of Mars, but usually form at its equator during its coldest time of year. Scientists noticed that last year — two years ago in Earth time— there were clouds beginning to form earlier than expected, so this year they were ready.

A gif of clouds drifting above Mount Sharp on Mars, taken by NASA’s Curiosity rover on March 19th. NASA/JPL-Caltech/MSSS

The images are not only stunning, they’ve provided new insights to the Curiosity team at NASA. The early clouds are at higher altitudes than most Martian clouds— which typically hover about 37 miles above the planet’s surface and are made up of water ice. The higher-altitude clouds are likely made of frozen carbon dioxide, or dry ice, NASA says.

Curiosity took these images of clouds on Mars just after sunset on March 31st. NASA/JPL-Caltech/MSSS

But it’s the color photos taken from the rover’s mast camera and stitched together from multiple images that are really breathtaking. NASA describes them:

Viewed just after sunset, their ice crystals catch the fading light, causing them to appear to glow against the darkening sky. These twilight clouds, also known as “noctilucent” (Latin for “night shining”) clouds, grow brighter as they fill with crystals, then darken after the Sun’s position in the sky drops below their altitude. This is just one useful clue scientists use to determine how high they are.

Curiosity also captured images of iridescent “mother of pearl” clouds, with pastel colors throughout. Mark Lemmon, an atmospheric scientist with the Space Science Institute in Boulder, Colorado said in NASA’s post that those colors come from cloud particles nearly identical in size. “That’s usually happening just after the clouds have formed and have all grown at the same rate,” he explained.

NASA’s Curiosity Mars rover spotted these iridescent, or “mother of pearl,” clouds on March 5th, the 3,048th Martian day, or sol, of its mission. NASA/JPL-Caltech/MSSS

Lemmon said he marvels at the colors that show up in these clouds; reds and greens and blues and purples. “It’s really cool to see something shining with lots of color on Mars.”