MagSafe PopSockets are here: we tested to see if they stick 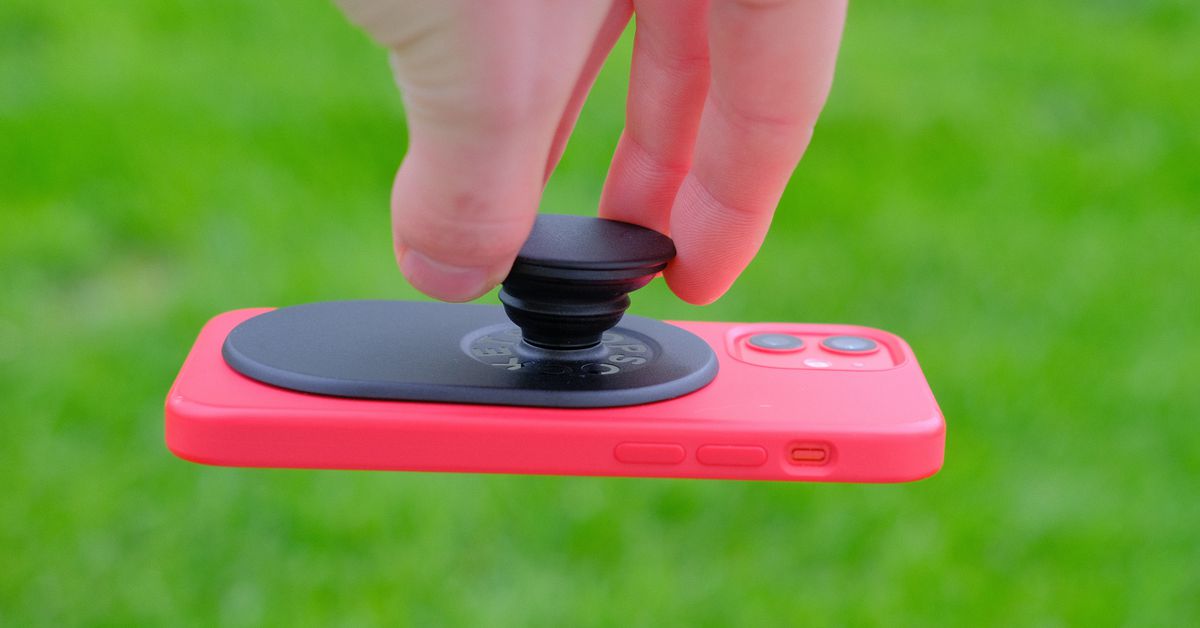 The PopGrip for MagSafe is bulkier than the regular PopGrips, but is easy to take off.

MagSafe PopSockets are finally here, after the famous phone handle company announced they would be coming in January. The PopGrip for MagSafe sells for $30, which is two to three times more expensive than the adhesive versions, but the bigger question that people have been asking since the announcement is whether they’ll be as trustworthy. I decided it was time to find out.

The PopGrip for MagSafe is a retractable grip for your phone (as the name implies) that can also work as a stand for watching video or a hands-free video call. PopSockets has made versions of the PopGrip for years now (and if you’ve got a collection of fun design tops, this will still work with those), but they’ve traditionally used an adhesive to attach to your device. The MagSafe version uses Apple’s system of magnets that it introduced on the iPhone 12 models and is compatible with everything from the iPhone 12 Mini to the gargantuan iPhone 12 Pro Max.

There have also been some attempts by third parties to make MagSafe mounts that you can stick to your iPhone, then stick a PopSocket to, but the PopGrip for MagSafe is an integrated, first-party version.

PopSockets makes it clear on the box that this shouldn’t be used with bare iPhones, and it’s easy to see why: the iPhone’s glass back doesn’t provide a lot of grip. But sometimes the question with accessories isn’t “what do the directions say” but “can I get away with using it like this?”

Looks like the answer is no! Listen to PopSockets, and do not use this thing with a bare phone. If you put it on and shake it around a few times you may get lucky and think that it’s fine, but I promise it will come off very easily at some point. Probably while you’re on some sort of perilous precipice.

That did make me wonder, though, what would happen if I had a plastic case that wasn’t MagSafe compatible. Would the magnets still reach through, and would the plastic be less slippery than the iPhone’s glass? I can’t answer the second question, because the answer to the first one is absolutely not. It basically just falls off, even with a reasonably thin MagSafe-less case.

Okay, well let’s give the PopSocket the best-case scenario: how well will it stick to Apple’s silicone MagSafe case, which has both magnets and a reasonably grippy texture?

I’d call that a pass!

As you can see, it’s not coming off — at least not until you want to pop it of to, say, wirelessly charge, in which case it’s actually very easy to remove. But maybe it’s just the specific way I was shaking it that let it perform so well. I will admit that I haven’t historically been a heavy PopSocket user, but I’ve been told that people put a lot of faith in the PopSocket adhesive. So that made me wonder what was the silliest thing I could do to really put the MagSafe case / PopGrip connection to the test.

And obviously the answer was karate.

Unlike my form after years of not practicing, my phone is still intact.

Make no mistake, if you want to dislodge the PopSocket from the phone, you can. If I’m holding the phone at a perfect parallel angle to the floor and shaking with all my might, it will eventually come off, but that doesn’t seem like a terribly realistic scenario and it’s been rock-solid in all my other tests.

It’s also worth noting that I wasn’t able to test the MagSafe PopSocket with other case materials, like Apple’s leather or clear plastic cases, so it’s hard to say if it would do as well. But it does seem that, with at least one of Apple’s cases, the MagSafe PopSocket can hang with the adhesive version. And if you use your phone with a non-MagSafe case, or no case at all? Well, you may have to stick with the sticky PopSockets, or buy a MagSafe case if you really want that sweet magnetic removability.