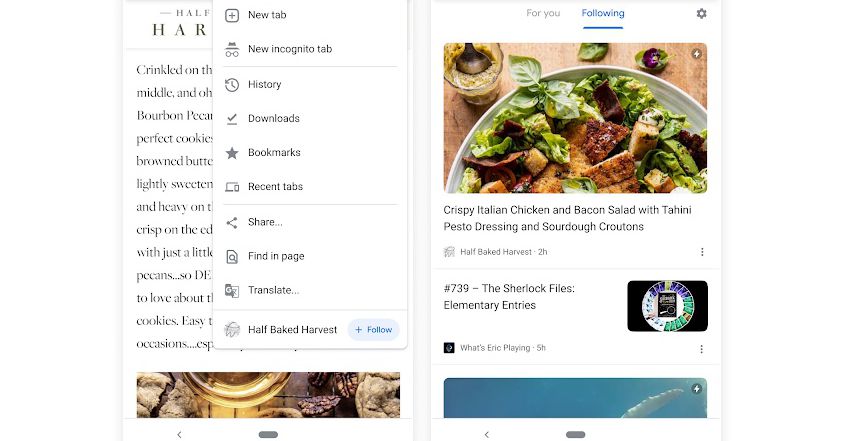 Google is testing a new feature for its Chrome browser on Android that lets users “follow” sites to create an updating list of new content they publish. The feature is based on RSS, an open web standard that’s been the backbone of many popular web aggregation tools in the past. That includes Google’s own, much beloved (and now defunct) Google Reader.

The test is small-scale: following sites will only be an option for some US users of Chrome Canary (the bleeding-edge version of Chrome that lets enthusiasts access beta features). Users will be able to follow sites from the browser menu, and updates will be aggregated in a card-based feed that’s shown when users open a new tab. It’s not clear whether this feed is wholly dependent on sites providing RSS support, or if Google will fill in the gaps itself.

Although this is just an early test, it’s nonetheless exciting for a certain sort of web user who misses the glory-days of RSS (and, by extension, a mode of internet discovery and distribution that faded years ago). At its core, RSS allows users to maintain a personalized feed of new content from favorite sites, blogs, and podcasts. And although tools that utilized these feeds were briefly very popular, they were eclipsed for numerous reasons.

Exactly why RSS fell from prominence is complicated. (Here’s a story from Vice and one from TechCrunch that help explain.) But whatever the ultimate cause, many see its demise as a turning point for the web: the moment when decentralized, chronological feeds were replaced by the engagement-driven algorithms of social media giants.

The halcyon days of 2013: the year of Google Reader’s death. Image: The Verge

Because the rise of Facebook, Twitter, and the like have had so many obviously bad effects (misinformation! Hoaxes! Nazis!), many look back wistfully on RSS as a sort of Golden Age for the web that failed from a surfeit of nobility and deficit of cunning. “If only RSS had thrived!” they say. “All this nastiness could have been avoided.” Perhaps. What’s clear is that Google is responding to a demand for new (read: old) ways of engaging with the web.

What happens next is anyone’s guess. Will Google follow through and push RSS-powered features to all Chrome users? Or will it get bored of a product that’s not integral to its bottom line? (As it did with Google Reader.) Bakaus, at least, suggests there’s more to come. “This is only the beginning of a bigger exploration, and to get this right, we need your feedback,” he tweeted. “Hit us up via @WebCreators to let us know what we need to build for you. I’m very excited about it!”