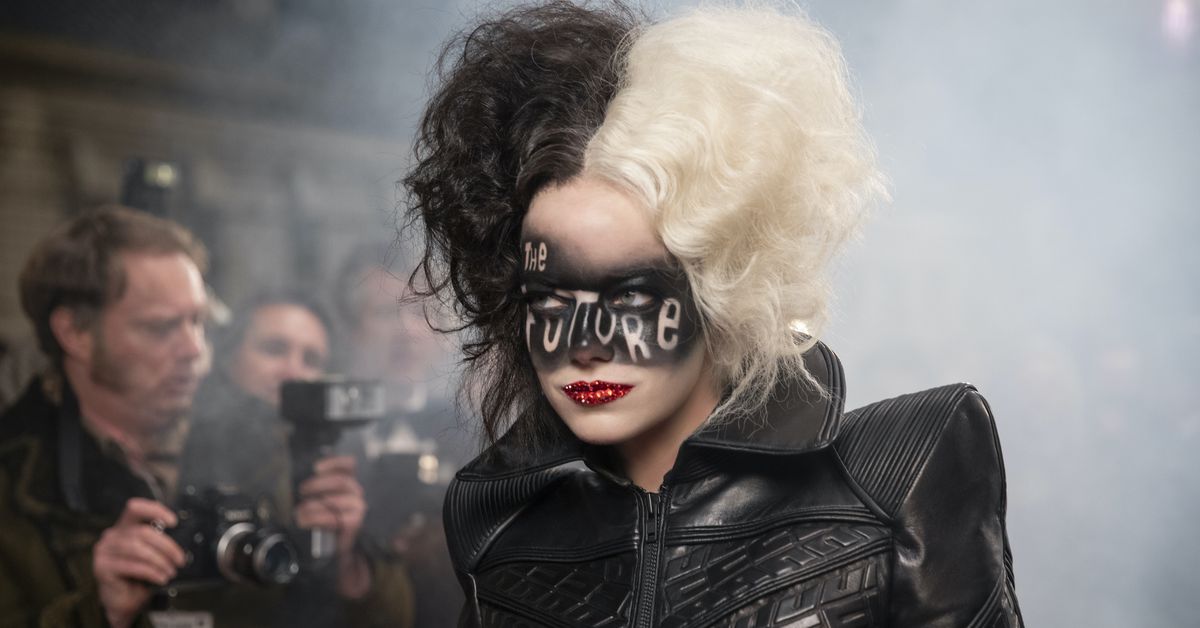 I spent the entire run of Disney’s Cruella torn between delight and horror. Rarely has a film so neatly emotionally vivisected me as this one about a villain best known for wanting to skin puppies to make a coat. Only Cruella isn’t about that character really. It’s not about her war with the fur industry or PETA. It’s definitely not about a collection of Dalmatian dogs fleeing her furrier desires. It’s a colorful and pulpy tale of a woman with profound narcissistic tendencies getting vengeance on a murderer and becoming a London fashion icon. I’m sorry if you ever thought, “I could never have anything but camp-fueled affection for Disney’s puppy killer” because this gal is a delight.

This is more Wicked than Joker in that it reimagines a notorious villain as a misunderstood hero besmirched by popular media. Yet I have no idea why it is a movie about Cruella de Vil and not simply an original film about a woman with profound narcissistic tendencies getting vengeance on a murderer and becoming a London fashion icon. Where Wicked (both the book and the musical) takes pains to explore how media can corrupt an image, Cruella largely sidesteps jibes about populism or media to just put on a big fabulous show.

Plus, apart from the occasional cameo from Roger (played by a wonderfully schluppy-looking Kayvan Novak), Anita (a perky but sly Kirby Howell-Baptiste), and some black-and-white spotted pups, Cruella has nothing to do with any of its source material. Wicked at least took us to the natural end of the story after building up its hero. I’m not saying I needed to see Emma Stone skin 101 puppies, but at least then the focus on Cruella would have made sense.

In every lull in the film I found myself trying to figure out why exactly Cruella exists, entertaining as it is. One colleague jokingly told me he thinks it was made because Disney made some digital dog tech from Lady and the Tramp and wanted to get the most out of it. To his credit, there are a lot of dogs running between Emma Stone’s legs and leaping over her and generally being adorable in Cruella. There are even a few Dalmatians! They all look realistic and pettable until the uncanny valley occasionally catches them in its maw and you are reminded that those are some very fake dogs.

And even if this film was greenlit as some bean counter’s way of making back the cash spent to produce the tech for Lady and the Tramp, it still means that somewhere once upon a time some Disney execs were sitting in their office, legs up on the desk, tasteful Mickey Mouse-branded socks peeking out from between expensively tailored pants and more expensive shoes, and looking at this pitch, saying “sure, let’s reimagine the story of that villain who really has no redeemable quality apart from her taste in cars as a misunderstood antisocial heroine just out to resolve some true injustices in the world.”

This woman was previously on fire. Image: Disney

At no point does the film attempt to explain — or even hint — at how Cruella would turn from a fashion icon with a very deeply buried heart of gold into a monster forcing her friends to kidnap puppies from another friend and to make a coat. It starts with Cruella, then called Estella, going to school, causing trouble, and being doted on by her exceptionally nice mother. After a murder that Cruella blames herself for, she flees into the streets of London and meets two young thieves, Jasper and Horace. She dyes her distinguishable hair and joins them in their heist and the three become a family.

But as much as Estella loves crime, her true passion is fashion.

We then shoot forward 10 years to an otherworldly version of ‘70s London. Estella’s adoptive brothers (Joel Fry gives Jasper heart even as Paul Walter Hauser happily plays Horace as a cartoon) get her a job at a high-end store in the hopes she’ll wow them with her skills as a designer and seamstress. And while she enrages her bosses, she catches the eye of the Baroness (Emma Thompson), the biggest and most powerful designer in London. Estella then is torn between a desire to prove herself to the Baroness and to destroy the Baroness, and the movie quickly becomes scene after scene of guerilla fashion shows framed like the most gorgeous-looking heists you’ve ever seen.

Emma Thompson will be compared to Meryl Streep in The Devil Wears Prada. The comparison will be well earned. Image: Disney

Cruella borders on camp with the way it hops between absurdity and melodrama — often in the same scene. I questioned if I was stoned as Cruella raced across London in a dump truck after charging a one-eyed Chihuahua with a jailbreak. Not because it was silly (it was!) but because it was played deadly seriously. Stone and Thompson anchor the whole affair with cartoonish characters treated with the gravitas of historical figures. They do not wink at the camera. They do not make sly referential jokes about the story material. They just go to war with flaming dresses and shimmering moth cocoons and the occasional blow of a dog whistle.

You usually know when you’re supposed to laugh and when you’re just supposed to enjoy yourself watching a movie, but I found myself torn constantly by Cruella. It’s like a fairy tale, and it’s like a really good graphic novel, and it’s unlike any of the films it will get compared to.

Cruella premieres on Disney Plus Friday, May 28th.