Big Oil and Gas had a no good, very bad day 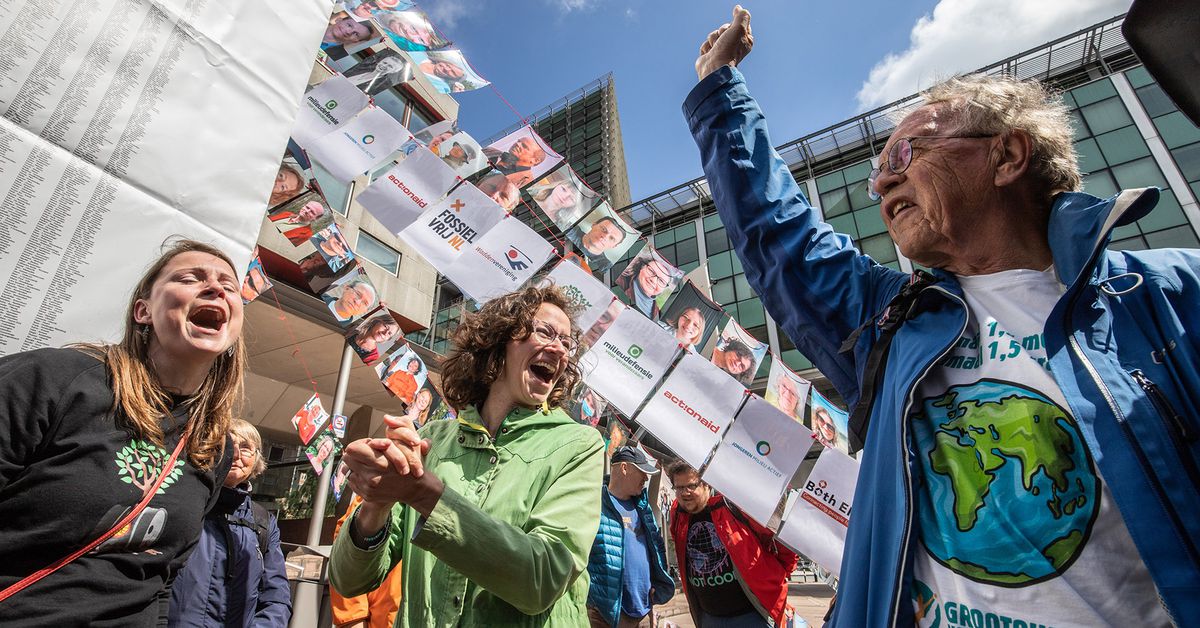 Fossil fuel companies are having a big reckoning with climate change this week. Shareholders for Exxon and Chevron voted for measures that could force them to take more responsibility for their emissions, while a Dutch court is forcing Shell to slash its pollution.

Taken altogether, the actions reflect a growing push forthe energy sector to phase outfossil fuels. Major oil companies had already taken some steps to at least appear to address climate change, but activists are pushing for more action on a faster timeline to meet the scale of the climate crisis.

Climate activist Bill McKibben called it a “watershed day,” adding that the ruling against Shell could be “game-changing.”

Exxon shareholders, during an annual meeting today, voted in at least two new board members who might force more climate-related change on the company. If they can sway others on the 12-member board of directors, they could direct Exxon to do business differently.

A small hedge fund called Engine No. 1, which has just a 0.02 percent stake in Exxon, nominated four “independent” candidates it says are capable of pushing the company in a more sustainable direction. Each new board member that’s voted in ousts a sitting member. One of the new board members is Kaisa Hietala, who previously helped lead oil refining company Neste’s venture into renewable energy products. Shareholders also voted in Gregory Goff, a former CEO for refinery company Andeavor. The other two seats were still too close to call after preliminary results came out this afternoon. This is the first time activist investors have successfully voted their picks onto Exxon’s board, The New York Times reported.

“the Company has failed to evolve in a rapidly changing world”

“Over the past decade, the Company has failed to evolve in a rapidly changing world, resulting in significant underperformance to the detriment of shareholders and risking continued long-term value destruction,” Engine No. 1 said in a statement about why it put forward its slate of candidates.

Exxon, the United States’ biggest fossil fuel producer, has been slower than its peers to pivot toward renewable energy sources. In December, it pledged to cut CO2 emissions by just 15-20 percent per barrel of oil and gas by 2025, and reduce methane emissions (a greenhouse gas more potent than CO2) by 40-50 percent.

Both Exxon and Chevron, the second-largest US oil producer, have set less ambitious environmental goals than peers in Europe. Chevron said in March that it wants to cut CO2 emissions from its operations by 35 percent per unit of production by 2028. Chevron’s shareholders approved a proposal today that forces deeper cuts. It calls on the company to specifically target emissions from the oil and gas it sells, which accounts for a majority of the emissions for which the company is responsible. Shareholders for ConocoPhillips passed a similar resolution earlier this month.

Dutch company Shell went further than its American counterparts by recently announcing that it would get to net-zero emissions for both its operations and the products it sells by 2050 — a commitment to reduce, capture, and offset all of its pollution. But promises to reach milestones decades from now aren’t very helpful unless they’re backed up by a plan to take immediate action.

“People around the world are demanding climate justice”

A landmark ruling from a Dutch court now pushes the company to act much faster. Instead of reducing emissions 20 percent by 2030, as the company had planned, the court ruled that Shell should slash emissions by 45 percent by 2030. Globally, emissions should drop roughly in half by the end of the decade in order to stave off more severe effects from climate change, according to United Nations climate scientists. Shell reportedly plans to appeal the decision.

Environmental groups, including Greenpeace and Friends of The Earth, filed the suit against Shell in 2019, claiming the company endangered Dutch citizens through its role in the climate crisis. “Shell cannot continue to violate human rights and put profit over people and the planet. This verdict is a clear signal to the fossil fuel industry. Coal, oil and gas need to stay in the ground. People around the world are demanding climate justice,” Andy Palmen, interim director of Greenpeace Netherlands, said in a statement.

A mountain of evidence points to the need to keep global warming from surpassing 1.5 degrees Celsius above pre-industrial levels, a target enshrined in the Paris climate agreement. Investments in new fossil fuel projects need to stop immediately in order to hit that target, the International Energy Agency said in a big report last week. The intergovernmental agency’s energy outlooks are often heeded by governments and energy companies, so its new advice on fossil fuels was widely seen as a sort of death knell for oil and gas growth. So while today might have been an unusually rough day for fossil fuel companies, there are probably more to come.