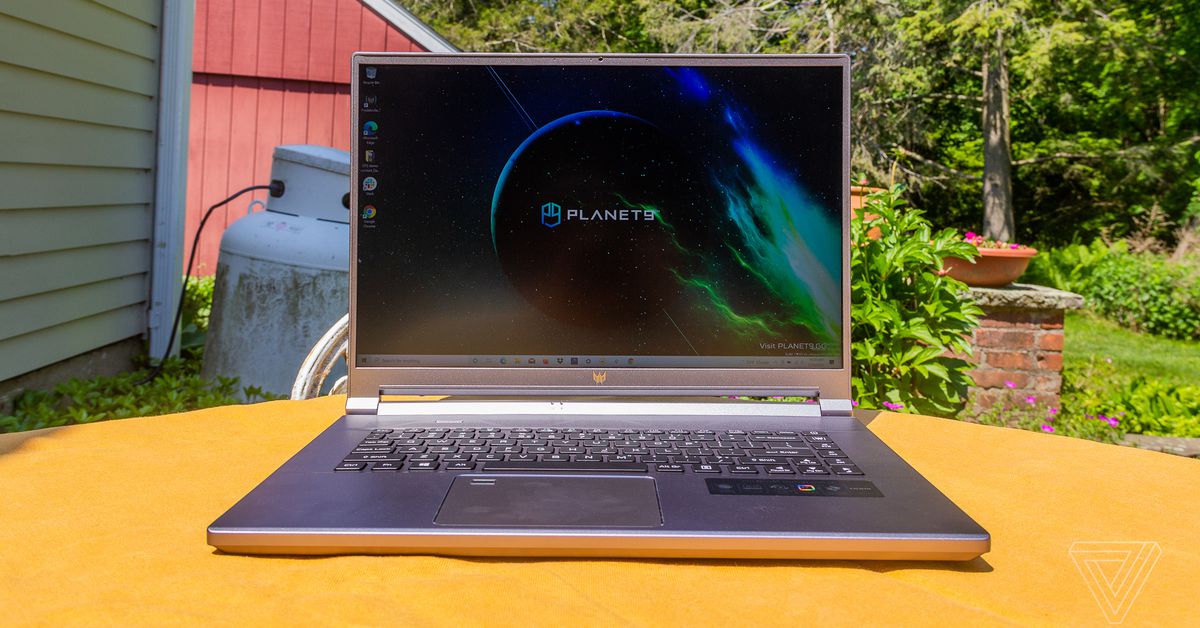 There’s a new Acer Predator in town: the 16-inch Predator Triton 500 SE. It has a new subtle design with a touch of RGB as well as the latest chips from Intel and Nvidia. It also has a feature that I am much too excited about: a 16:10 display.

Put this next to the previous Triton 500, and this device looks much more like something you might bring to a meeting or a lecture. It’s not quite as flashy. The last model’s glowing Triton logo has been removed from the center of the lid and squeezed into the top-right corner. The previous Triton also had “Predator” printed along the large bottom bezel, which has been replaced by a smaller and subtler Triton logo as well. The corners are sharper, the keyboard is a bit blacker — it’s a more modern, professional look.

No more logo in the center.

The biggest thing you’ll probably notice, though, is that the laptop is taller. The new 16-inch 16:10 display affords extra vertical space compared to the 15.6-inch 16:9 display on the previous Triton. I got to spend a bit of time with a pre-production unit of the Triton 500 SE, and I’m going to have trouble going back to a 13-inch 16:9. This is one of the roomiest displays I’ve ever used. I had no trouble stacking 2-3 tabs and apps alongside each other and jumping in between them. I never had to zoom out of anything.

There are three panel options: a 165Hz LCD panel, a 165Hz Mini LED panel, or a 240Hz IPS PolarBlack panel (which Acer says will cover 100 percent of the DCI-P3 color gamut). All the screens have 2560 x 1600 resolution. Mini LED, which also powers the screen of Apple’s latest 12.9-inch iPad Pro, is unusual to see on laptops. It’s designed to emulate the look of an OLED screen on an LCD panel, and it can produce excellent contrast.

The Triton has new chips as well; it’s configurable with up to an 11th-Gen Intel Core i9 processor and an Nvidia GeForce RTX 3080 GPU. (Acer hasn’t shared the clock speeds and graphics power you can expect from these chips yet, so I look forward to digging those up during the review process.) It also provides more ambitious specs for power users than previous Tritons, supporting up to a whopping 64GB of memory and 4TB of storage. (Last year’s Triton 500 maxed out at 32GB and 2TB, respectively.)

The Triton 500 SE has pretty much every port you might need, including two Thunderbolt 4 ports, one on each side, in addition to two USB 3.2 Gen 2, one HDMI 2.1, one 3.5mm audio jack, one SD card reader, an ethernet port, and a DC-in for power. One of the USB 3.2 Gen 2 ports supports power-off USB charging as well.

There’s a fingerprint in the top-left corner of the touchpad. The webcam in the top bezel actually didn’t look too terrible in my testing and produced a viewable picture in low-light conditions. It doesn’t support Windows Hello, though.

Finally, Acer is also very excited about the new cooling system, which features what it refers to as its “5th-Gen Aeroblade 3D fan” in a triple-fan system with five heat pipes. Acer says this will provide up to 10 percent better airflow than the previous Triton 500. We’ll have more specific metrics once we’ve been able to write a full review of this device; my first impression is that the fans were often audible on this pre-production unit, but I never felt an uncomfortable amount of heat and never saw the CPU get anywhere close to a worrying temperature.