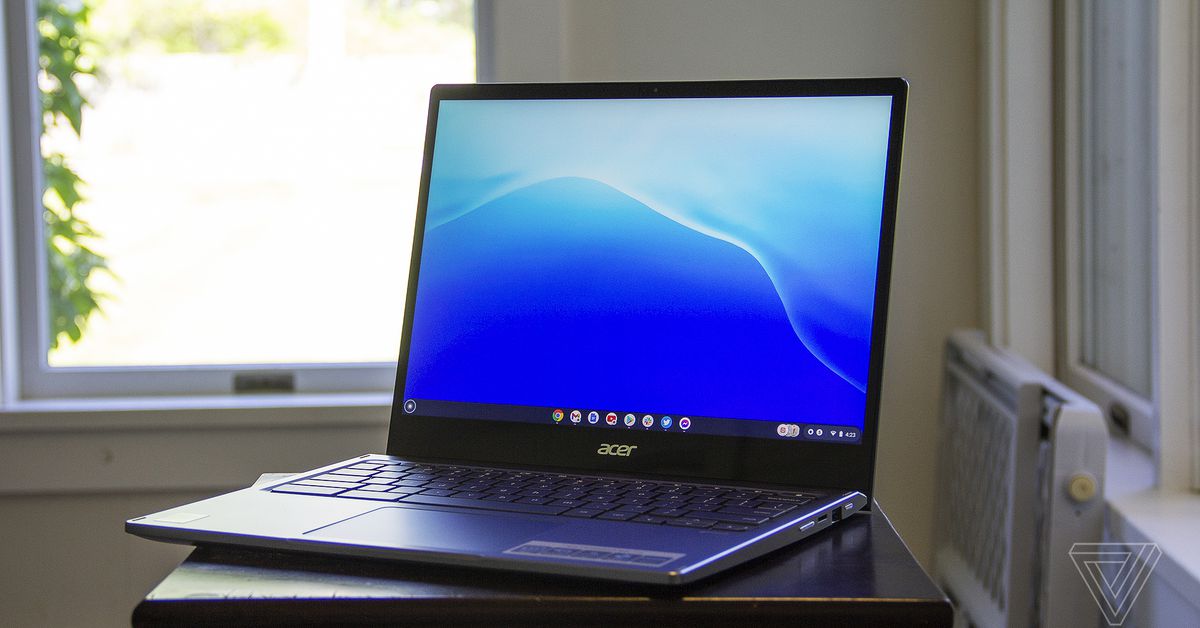 Acer has made three significant upgrades to the best-in-class Chromebook Spin 713. The first is that the device now has Intel’s newest 11th Gen processors. The second is that the USB-C ports both support Thunderbolt 4. And the third is that it now has an optional fingerprint reader.

These aren’t the most revolutionary spec bumps in the world. The rest of the Spin 713 remains the same: it has a fantastic 3:2 touch display, a good backlit keyboard, a smooth touchpad, and good value for its premium components. But the changes add up. And they serve to push the Spin 713 even further ahead of its competition than it was before. It’s very much still the Chromebook to buy. 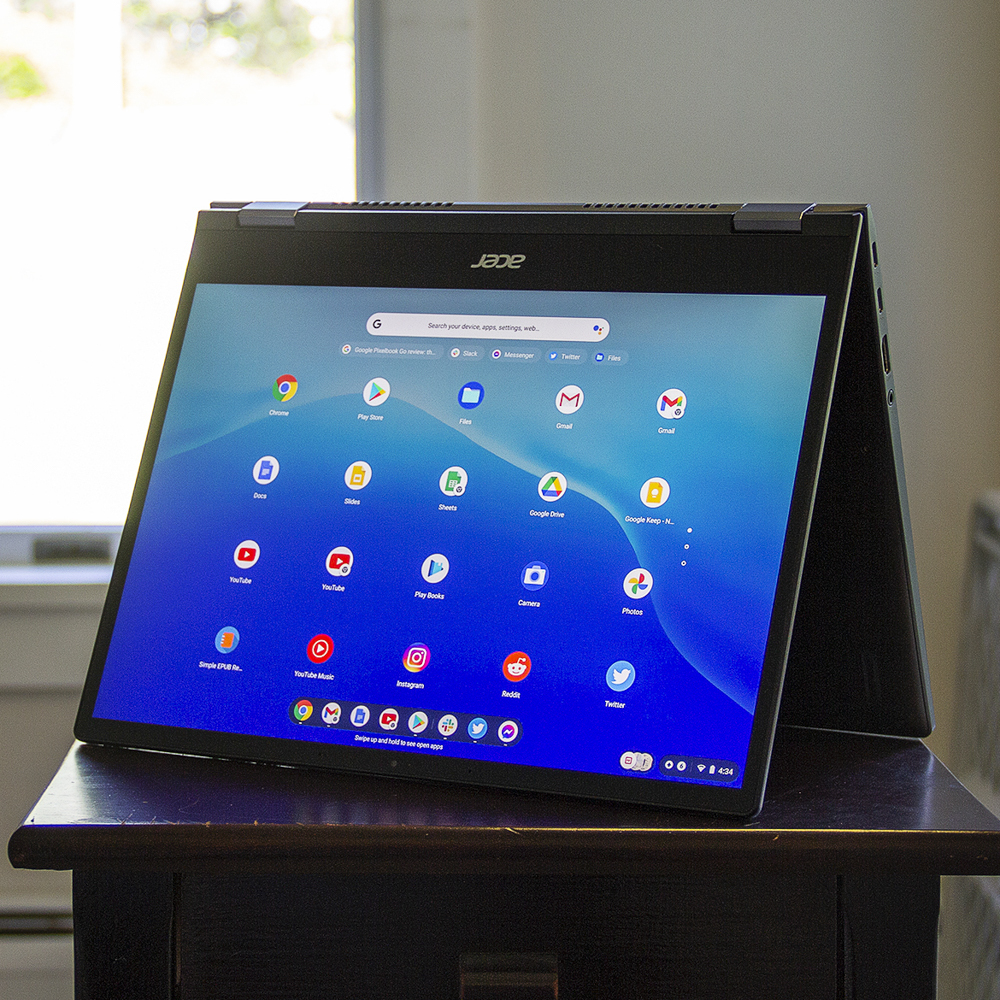 The Spin 713’s standout feature is its 2256 x 1504 panel. It’s one of the best Chromebook screens I’ve ever used. Colors really pop, details are crisp, and it gets plenty bright. Though the screen is glossy, I rarely saw glare, and what I did see didn’t hinder my work.

But my favorite aspect of this display (and of this Chromebook as a whole) is the 3:2 aspect ratio. You get noticeably more vertical space than you would from a standard 16:9 display of a similar size. Less scrolling, less zooming out, more room for all your tabs and apps. I’m a fan of 3:2, and I’ve been happy to see more laptop models taking it up over the past year.

Another strength (which Acer has strengthened with this model) is the port selection. This is the first Chromebook to support Thunderbolt 4 — many premium Chromebooks don’t even support older Thunderbolt standards. There are not one, but two USB-C Thunderbolt 4 ports on the left side of the Spin. This makes the Spin 713 one of the most affordable machines in the world to include Thunderbolt 4.

The USB-C ports also support USB 3.2 Gen 1, DisplayPort, and 5V charging. Elsewhere, you get an HDMI port and a microSD reader, in addition to a headphone jack and a USB-A 3.2 Gen 1. The Spin also supports Wi-Fi 6 and Bluetooth 5.0.

Flip it around in tent or tablet mode. USB-A, microSD on the right. Two USB-C, an HDMI, and an audio jack on the left.

The fingerprint reader also helps put the Spin 713 above premium competitors; the lack of biometric authentication was one of our very few knocks against the last model. The sensor lives on the deck, beneath the arrow keys. It’s the same color as the Spin’s finish and is nicely camouflaged.

The Spin’s keyboard and touchpad are also quite good. The keyboard is comfortable and backlit, though I wish the keys didn’t feel quite so plasticky. The touchpad is smooth, accurate, and quite large.

Like its predecessor, this Spin 713 has two main drawbacks. The first is that its audio is thin, and I heard a bit of distortion at maximum volume. The second is that the Spin’s aesthetic is utilitarian. The finish is somewhat drab, and the screen bezels are chunky. I wouldn’t call it ugly, but it’s something that would fit in on a school laptop cart.

That said, the Spin is also fairly sturdy, with an aluminum chassis, and feels better made than many plasticky devices you’ll find at this price point. The 360 hinge is easy to flip around, and I only saw a tiny bit of screen wobble while I was typing.

A tiny bit of screen wobble, but I’ve seen much worse. Here it is flipped around.

Performance is the other area where the new Spin 713 is supposed to have gotten major upgrade. My review model is $699.99 for a Core i5, 8GB of RAM, and 256GB of storage. This is the primary configuration that Acer will be selling to start, but more will be coming in August with pricing to be announced.

The Spin is the first Chromebook to be certified through Intel’s Evo program, which is meant to recognize the best portable Intel laptops on the market. The Spin did everything I needed it to, including editing big batches of photos and running multiple demanding apps at a time on top of Zoom calls and Spotify streams, quite fast and without any performance issues.

That was also true of last year’s Spin 713. What’s new this year is that I’m hearing the fans. Last year’s model was very quiet, but the fans were almost constantly spinning in this model. The noise wasn’t always annoying, but it was often audible. This makes me anxious about the Spin 713’s ability to cool a Core i7, so even if Acer sells a Core i7 model later this year, I’d recommend that most people stick with a Core i5 model unless you know you need an i7. (The Core i5’s performance here is going to be enough for 90 percent of people.)

I didn’t feel much heat in the keyboard, so the fans were doing their job.

What’s also gotten a bit worse is battery life: I averaged seven hours and 29 minutes of consistent work with the screen at 50 percent brightness, running some trials with a bunch of Android apps and some trials just in Chrome. That’s about an hour worse than what I averaged on the previous model, though both results are respectable for this price. The battery took 55 minutes to juice from zero to 60 percent with light Chrome use, which is a bit slower than last year’s model (but close).

The Spin 713 runs Chrome OS, as all Chromebooks do. It supports all Android apps via Google Play. Everything ran smoothly on this system, in both clamshell and tablet modes. Many Chrome OS apps have improved since I used them on last year’s 713. Slack, for example, was crashing all over the place last year, and is technically usable now. That said, I still generally find that most of my preferred services (Messenger, Slack, Reddit, Instagram, the like) are equivalent or better experiences in browser form. I do like being able to offload distractions like Spotify and Twitter into their own apps so I don’t have them mixed in with my Chrome tabs, but that’s about as far as my typical use of Android apps on a Chromebook goes.

You could totally miss the fingerprint reader. But it’s there!

As was the case with its predecessor, the Spin 713 isn’t a perfect Chromebook. It’s also not cheap as far as Chromebooks go. But it offered unbeatable value last year, and its value has gotten even better.

To illustrate just how much this device is offering for its $699 price, look to the premium Google Pixelbook Go. To buy a Pixelbook Go with an 8th Gen Core i5 (which is now an old chip), 8GB of RAM, and 128GB of storage (half of what you get in this Spin configuration), you’d be paying $849. The Pixelbook does have some advantages over the Spin, of course: you’re getting better build quality, a lighter chassis, and slightly better audio. But the Pixelbook has no biometric authentication, it has very few ports and doesn’t support Thunderbolt 4, it’s 16:9, and it’s not a convertible. It’s miles behind in almost every other way.

In other words, if you don’t mind a laptop-cart look, the Chromebook Spin 713 is an incredible value. The more power-hungry processor has changed the calculus slightly, but so have the new features. And ultimately, the Spin still comes out on top.

Photography by Monica Chin / The Verge